Factory automation continues to develop year after year, and the need for pumps to supply real-time operating data to control networks is rapidly increasing. This operating data is necessary so that pump performance can be monitored and adjusted to meet the constantly changing production requirements. Hardwiring a sensor into a pump’s rotating drive shaft usually requires the use of a delicate slip ring or the use of a non-contact radio frequency detector.
As industries strive to become more and more productive, technologies that support smart factories, Industry 4.0, and the Industrial Internet of Things (IIoT) are being used with increasing frequency on the shop floor. The potential of these and other developments to improve manufacturing quality and efficiency over time is almost limitless.
However, such advances are not without their difficulties; one challenge with the advances is the need to connect machines and equipment such as pumps, mixers and conveyors to the control computers. Wiring up one machine is not a great task, but a highly automated factory will have hundreds or even thousands of these machines, so the task can become very considerable in size. 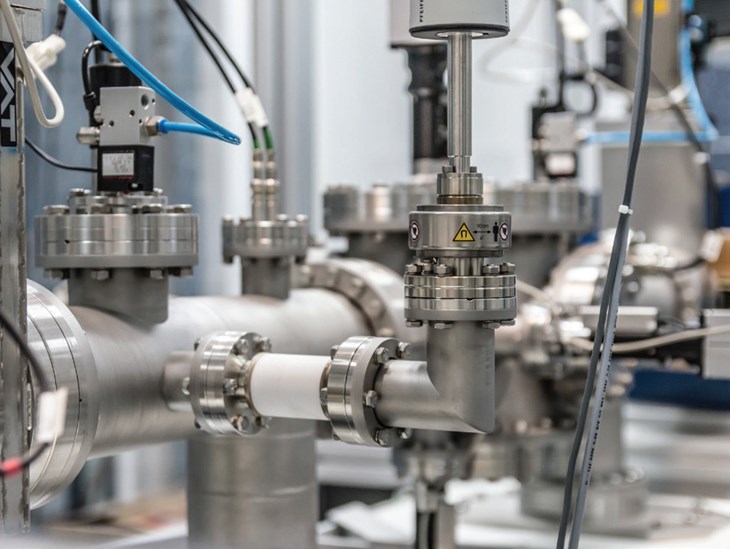 Rewiring Pumps
In addition to the task of automating an entire factory, there is also the inevitable need to relocate, rewire and recommission individual pumps and machines on an ongoing basis. Parts of the production process are constantly reconfigured to adapt to changing needs. The result is that even a moderately-sized factory must employ a significant number of electricians and engineers who spend their days wiring and rewiring equipment.
It follows that, if the amount of time spent on wiring and installation could be reduced, the factory could reduce its operating costs significantly. One of the most time-consuming tasks is fitting a sensor to equipment that rotates, such as a pump, which requires the use of a fiddly and fragile slip ring. Engineers need to do this with pumps because they know the torque in the drive shaft is fundamentally important. Torque is, in essence, a measure of the load being exerted by the fluid in the pump, which is equivalent to its volumetric flow.
Furthermore, changes in the pump’s torque level over time can be used as indicators of other issues. For instance, a gradual increase in torque may suggest increasing flow to compensate for growing leakage; a sudden increase may indicate a blockage downstream of the pump, while a sudden decrease may be due to an upstream blockage.
So, in an automated plant, it is well worth it to measure pumps’ torque, but it is also necessary to make fitting a suitable sensor a quicker and easier process, and therefore more cost effective.
A New Type of Sensor

A wireless sensor exists that replaces the need for physical wiring and slip rings with radio wave communications. Fitting this sensor typically takes about one-fifth the time required for a conventional hard-wired transducer. An example of this new sensor technology is a product called TorqSense.
A shaft under the rotary load will twist very slightly along its length, in proportion to the magnitude of the load. The sensor measures this twist in real time and its electronics converts the reading into a torque value.
The sensor’s transducers lend themselves to test rig uses because they are non-contact measuring devices. Attached to the surface of the transducer shaft are two Surface Acoustic Wave (SAW) devices – when torque is applied to the shaft, the SAWs react to the applied strain and change their output.
The SAW devices are interrogated wirelessly using an RF coupling, which passes the SAW data to and from the electronics inside the body of the transducer. All you have to do is set up a transducer in the test rig and fire it up.
The SAW frequencies reflected back are distorted in proportion to the twist in the test piece, which in turn is proportional to the level of torque. There are some clever electronics to analyze the returning wave and feed out torque values to a computer screen.
As this new sensor technology method does not require contact with the rotating shaft, it offers complete freedom from the slip rings, brushes and/or complex electronics found in traditional torque measurement systems. These devices have a high immunity to magnetic forces allowing their use in, for example, motors where other analogue technologies are very susceptible to electronic interference. 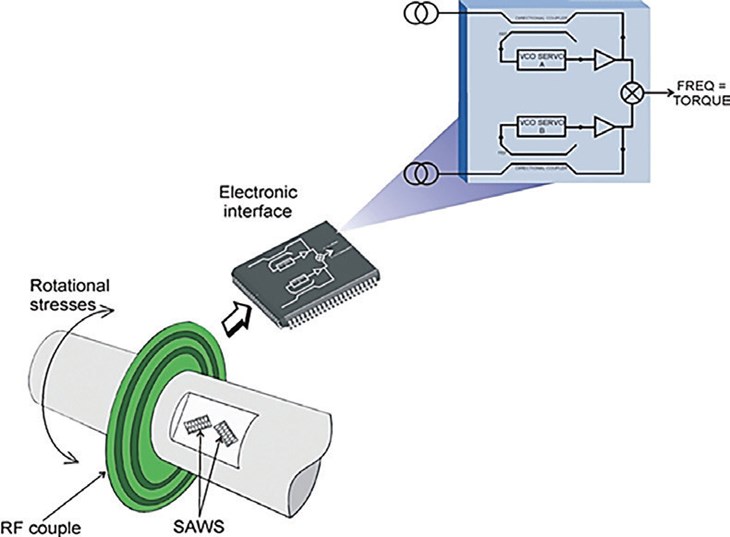 The distorted reflected waves are known as Surface Acoustic Waves (SAWs). These may also be known as Rayleigh Waves, named after their discoverer, English gentleman-scientist John William Strutt, 3rd Baron Rayleigh, 1842-1919, who first identified them as one of the destructive components of earthquakes.
In its simplest form, a SAW transducer consists of two interdigital arrays of thin metal electrodes deposited on a highly polished piezoelectric substrate such as quartz. The electrodes that comprise these arrays alternate polarities so that an RF signal of the proper frequency applied across them causes the surface of the crystal to expand and contract and this generates the surface wave.
These interdigital electrodes are generally spaced at half- or quarter-wavelength of the operating center frequency. Since the surface wave or acoustic velocity is less than one ten-millionth the speed of light, an acoustic wavelength is much smaller than its electromagnetic counterpart.
For example, a signal at 100Mhz with a free space wavelength of three meters would have a corresponding acoustic wavelength of about 30 microns. This results in the SAW’s unique ability to incorporate an incredible amount of signal processing or delay in a very small volume. As a result of this relationship, physical limitations exist at higher frequencies when the electrodes become too narrow to fabricate with standard photolithographic techniques and at lower frequencies when the devices become impractically large. Hence, at this time, SAW devices are most typically used from 10Mhz to about 3Ghz. 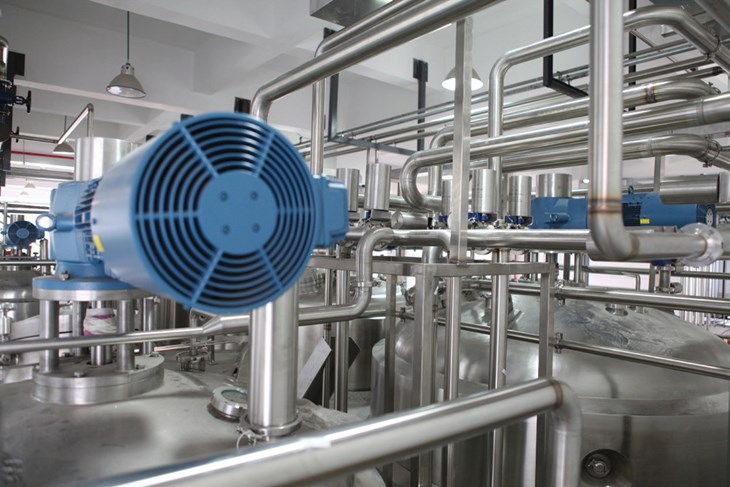 Bluetooth
Bluetooth sensors open up many new possibilities for sensor technologies: wireless systems will be welcome in cable-dense environments such as automated factories, it will allow torque measurement in situations where it was previously difficult or even impossible by simply plugging into the sensor’s existing 15-way ‘D’ digital lead connector, and it will enable torque monitoring via any Bluetooth enabled device.
Applications

SAW-based torque sensors have been used around the world and in many fields, from pumps to test rigs to wind turbines and generators based on tidal or river flows. They are used extensively in the high-tech world of the development of engines and gearboxes for Formula 1 and other hyper performance cars as well. Torque feedback systems have also been used by security firms to determine what direction their movable CCTV cameras are facing so that they can efficiently watch the premises under their protection. They are also used in industrial mixing, long duration scientific experiments, to model aircraft thrust lift and control systems, etc.
The sensor technology can be used with virtually all pump-based systems, from microdosing of active ingredients in pharmaceutical production, and cake filling injection in high volume bakeries, to lubricant and coolant circulation in manufacturing machinery, and flow control in industrial washing machines. They can prove invaluable when coupled with the giant pumps used for fresh water distribution, foul water handling and flood management systems. In fact, it is fair to say that their potential uses with pumps are almost endless.