The year is 2020, and the Department of Energy is getting serious about pump efficiency. New requirements cover pumps from 1 to 200 horsepower with nominal flow rates starting at 25 gallons per minute and heads up to 460 feet. These requirements are an amendment of the original Energy Policy and Conservation Act of 1975 (EPCA). Until now, little attention was given to pumps with an exception to what was driving the pump: the electric motor. As these new requirements come into effect, what are th

The most recent major motor efficiency mandates went into effect in 1997 (Energy Policy Act of 1992) and 2010 (Energy Independence and Security Act of 2007). EPAct 1992 required that motors meet NEMA’s Energy Efficient requirements and EISA 2007 required that pumps meet NEMA Premium efficiency requirements.
Many incentives and utility rebates were associated with these incremental mandates. If an end user had a pump driven by a 15-horsepower motor (pre-EPAct) with a nameplate efficiency of 88.5%, a rebate of $375 ($25×15 horsepower) would be given upon replacement with a NEMA Premium motor nameplated at 90.2%. There would be a reduction in electrical consumption, but how much could be missed by not looking at the pump efficiency? Had there also been an incentive program for pumps, there would have been many double-digit improvements in addition to the 1-2% improvements in motor efficiency. The new pump efficiency standards will hopefully change that.
Motor Efficiency Classes
The current NEMA standards for motors (NEMA MG1 – 2016) state two efficiency levels: Energy Efficient and NEMA Premium. As EISA 2007 went into effect in 2010, most pump motors today must be equipped with NEMA Premium class motors. 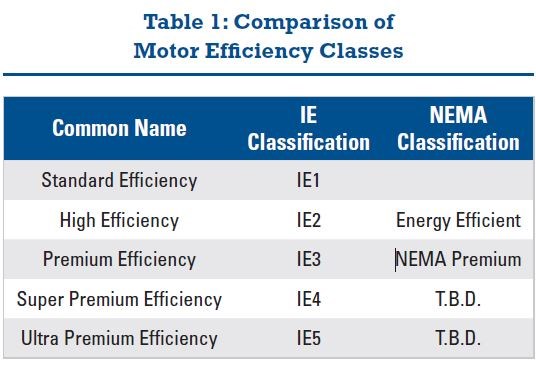 Manufacturers have been able to create motors in the IE4/IE5 range by using permanent magnets. Permanent magnets made of neodymium iron boron or samarium cobalt are incorporated into the rotor, resulting in much higher motor efficiencies and substantial decreases in losses. In terms of pump applications, these motors are known as permanent magnet synchronous motors (PMSM), electronically commutated motors (ECM), or permanent magnet (PM) motors.
One of the characteristics of PM motors is that they require a control – they cannot be started across the line. Therefore, pumps with IE4 and IE5 motors must be supplied with variable speed controls. As pumps are currently being controlled with variable frequency drives (VFDs), this should not add complexity to today’s market. As a matter of fact, it simplifies things: since PM motors require a control, pump manufacturers are now supplying the pumps, motors and controls as one product.

Optimum pump performance also requires proper control. It is not a matter of installing the hardware; what is required to achieve optimum performance comes in the form of firmware, software and an easy to use interface. It is not uncommon to see variable speed pumping systems operating inefficiently. Fortunately for today’s market, many pump manufacturers have recognized this inefficiency and are creating innovative ways of controlling and factory programming pumps.
Before a variable speed pump is purchased, the control mode should be known. Many pump manufacturers who offer integrated pump solutions have easy to program control modes for many common pump applications. Integrated pump solutions can also be supplied with pressure and temperature sensors that can further simplify the installation. Control logic can now include pump curve information, which allows the control to estimate pump performance without the need for flow sensors. For certain pump types, pump performance (flow and head) can be estimated by using power consumption and pump speed. 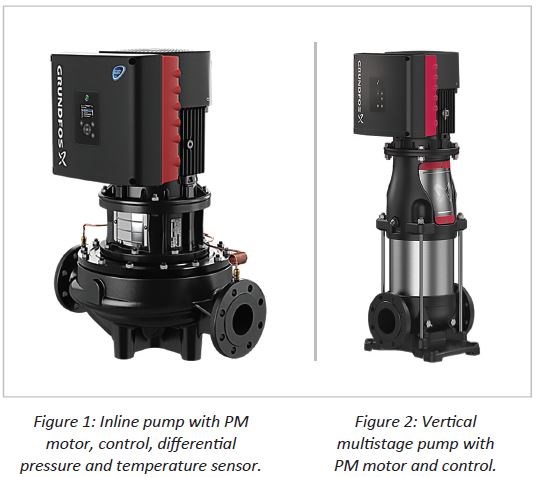 One big advantage to complete integrated pump solutions is that the connection to the building management system is simplified. Traditionally, pumps, motors, controls and sensors each represented several control points that needed to be configured by the building management system integrator; today that can be reduced to a single control point. From that single connection, pumps can be controlled (switched on and off, setpoints adjusted) and things like pump speed, power and differential pressure can be monitored. Integrated pump solutions also offer a big opportunity for end users to reduce their pump energy consumption while keeping the installation costs to a minimum. Because the pump can be supplied complete with drive, controls and sensors, the end user does not have to worry about things such as space to mount a drive or cutting pipes to add a sensor. The replacement pump should also be more efficient, especially if the motor is of the permanent magnet variety, which means the existing electrical wiring can be utilized as there will be a reduction in motor current.
Energy Savings

A question often asked is how much energy can be saved, and there is really no clear-cut answer that can be applied to all pump applications. To estimate energy savings for a proposed pump project or replacement, a flow profile and the proposed control mode should be known. A flow profile can be determined through data logging or can be estimated based on industry standards or trends.
Table 3 is an example of a flow profile. The peak flow in this example is 500 gallons per minute and the lowest flow is 125 gallons per minute. The number of operating hours is greatest at the lower flow rates, which is typical for many pump systems.

Figure 3 shows an example for pressure-based control modes that can be supplied by a pump manufacturer or can be configured during the commissioning process. If an end user is not sure about which control mode can be made in their system, knowing they have choices and showing how much energy can be saved with each will enable them to make sound decisions regarding the pump system.

An example of energy savings can be seen in Table 4. The fixed speed/uncontrolled pump is considered a baseline pump where no variable speed controls are used. The energy consumption can be cut nearly in half by using a PM motor and a constant pressure control mode. When proportional pressure is used, the energy is cut by nearly 60%, and another 5% can be saved by going to quadratic control. Many believe that constant head applications like pressure boosting do not lead to significant energy savings; this is not the case when proper pump selection takes place. There is also a second quadratic pressure control (QPC) mode listed. This shows the energy consumption for an IE3 motor (NEMA Premium) to show the difference between using IE5 PM motors and IE3 NEMA Premium motors with the same control mode. The IE5 PM motor in this case saves an additional 10% in energy costs over the IE3 motor.
Summary

With pump efficiency becoming an area of focus by way of the Department of Energy, efficient pump solutions will be a greater interest in the market. The use of motor technology that exceeds current motor standards is a sure-fire way of achieving this. Supplying fully integrated pumping solutions will help with getting more efficient pumps into the market in both new construction and replacement projects.