Pump Engineer is proud to present Q & A | Pump Seal Considerations. This article will address the installation processes and considerations to be made when selecting a high pressure dual mechanical seal using a Plan 53B. Readers are encouraged to ask questions for consideration in the future.

By Michael Huebner, Flowserve Corporation
Q: We will be installing high pressure dual mechanical seals and are considering using a Plan 53B? What are the considerations? What are the differences between the alarm strategies?
Arrangement 3 mechanical seals are dual seals where the barrier fluid cavity between the seals is maintained at a pressure greater than the seal chamber pressure. Over time, the industry has developed several strategies for creating the high-pressure environment necessary for these seals. These strategies are captured in the mechanical seal’s piping plans. While many of these plans serve similar functions, the operating characteristics of each can be very different and will impact all aspects of the sealing system.
Piping Plan 53B, as defined by API 682, is a piping plan which pressurizes the barrier fluid with a nitrogen charged bladder accumulator. The pressurized bladder acts directly on the barrier fluid, pressurizing the entire sealing system. The bladder prevents direct contact between the pressurization gas and the barrier fluid eliminating the absorption of gas into the fluid. This allows the Piping Plan 53B to be used in higher pressure applications than Piping Plan 53A. The self-contained nature of the accumulator also eliminates the need for a constant nitrogen supply, which makes the system ideal for remote installations.
The benefits of the bladder accumulator are, however, offset by some of the operating characteristics of the system. A Piping Plan 53B’s pressure is determined directly by the pressure of the gas in the bladder. This pressure can change dramatically due to several variables. 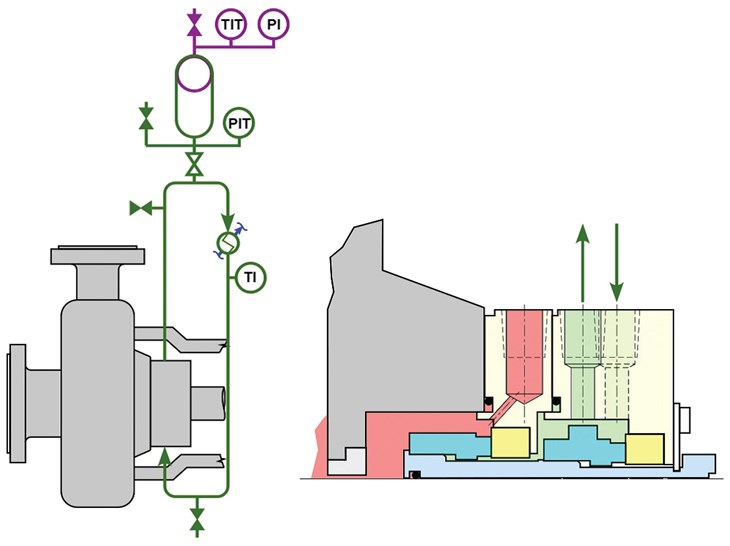 During operation, the mechanical seals will consume barrier fluid through normal seal leakage. This barrier fluid is replenished by the fluid in the accumulator, resulting in an expansion of the gas in the bladder and a decrease in system pressure. These changes are a function of the accumulator size, the seal leakage rates, and the desired maintenance interval for the system (e.g., 28 days).

The change in the system pressure is the primary way that the end user tracks seal performance. Pressure is also used to create maintenance alarms and to detect seal failures. However, pressures will be continuously changing while the system is in operation. How should the user set the pressures in the Plan 53B system? When is it necessary to add barrier fluid? How much fluid should be added?
The first widely published set of engineering calculations for Plan 53B systems appeared in API 682 Fourth Edition. Annex F provides step-by-step instructions on how to determine pressures and volumes for this piping plan. One of the most useful requirements of API 682 is the creation of a standard nameplate for bladder accumulators (API 682 Fourth Edition, Table 10). This nameplate contains a table which captures the pre-charge, refill, and alarm pressures for the system over the range of ambient temperature conditions at the application site. Note: the table in the standard is just an example and that the actual values will change significantly when applied to a specific field application.
One of the basic assumptions of Figure 2 is that the Piping Plan 53B is expected to operate continuously and without changing the initial pre-charge pressure. There is also an assumption that the system may be exposed to an entire ambient temperature range over a short period of time. These have significant implications in the system design and require that the system is operated at a pressure greater than other dual seal piping plans. 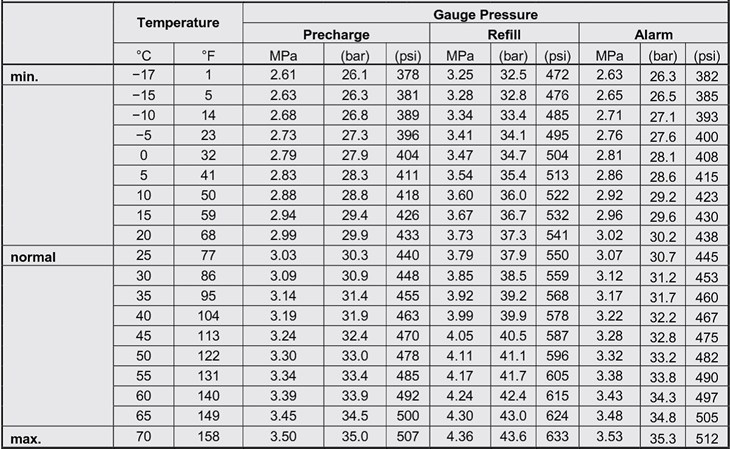 Some end users demand a simpler approach and desire a strategy where the both the alarm pressure and the refill pressures are constant (or fixed) and independent of ambient temperatures. The fixed-fixed strategy provides the end user with only one pressure for refilling the system and only value for alarming the system. Unfortunately, this condition must assume that the temperature is at the maximum value, since the calculations compensate for the ambient temperature dropping from the maximum to the minimum temperature. This results in the system operating at higher pressures. In some applications, using a fixed-fixed strategy may result in changes in the seal design or the MAWP ratings for other system components to handle the elevated pressures.
Other end users will apply a hybrid approach with a fixed alarm pressure and floating refill pressure. This can reduce the operating pressure while simplifying the alarm settings. The decision of the correct alarm strategy should only be made after considering the application condition, ambient temperature range, and end user’s requirements.
Eliminating Roadblocks
There are some modifications in the design of the Piping Plan 53B which can help mitigate some of these challenges. Heating from solar radiation can greatly increase the maximum temperature of the accumulator for design calculations. Placing the accumulator in the shade or constructing a sun shield for the accumulator can eliminate solar heating and reduce the maximum temperature in the calculations.
In the descriptions above, the term ambient temperature is used to represent the temperature of the gas in the bladder. Under steady-state or slowly changing ambient temperature conditions, this is a reasonable assumption. If there are large swings in the ambient temperature conditions between day and night, insulating the accumulator can moderate the effective temperature swings of the bladder resulting in more stable operating temperatures.
This approach can be extended to using heat tracing and insulation on the accumulator. When this is properly applied, the accumulator will operate at one temperature regardless of the daily or seasonal changes in ambient temperature. This is perhaps the most important single design option to consider in areas with large temperature variations. This approach has a large installed base in the field and has allowed the Plan 53B to be used in locations which would not have been possible with heat tracing.
End users who are considering using a Piping Plan 53B should be aware that this piping plan is not simply a Piping Plan 53A with an accumulator. Virtually every aspect of the system design, commissioning, operation, and maintenance of a Plan 53B is unique to this piping plan. Most of the frustrations that end users have experienced come from a lack of understanding of the system. Seal OEMs can prepare a more detailed analysis for a specific application and can provide the background required to help the end user properly specify and operate this system.