Pump Engineer is proud to present Q&A | Fluid Temperature in Seal Chambers. This article will address the primary ways that the temperature of a process fluid in a seal chamber can be reduced, to preserve the reliability of the seal. Readers are encouraged to ask questions for consideration in the future.

Q: What options are available for reducing the process fluid temperature in the seal chamber?

There are two main options for decreasing the process fluid temperature in the seal chamber. While both can be effective, there are important differences which must be considered.
Piping Plan 21

Piping Plan 21 connects a high-pressure region of the pump (typically the pump discharge) to the lower pressure in the seal chamber. This creates a flow of process fluid that is controlled by a restriction, such as an orifice. The flow is then directed through a seal cooler, (e.g. heat exchanger) before entering the seal chamber, thereby flooding the seal with a lower temperature fluid. The advantage of this piping plan is that it reduces the temperature in the environment around the seals. It also creates a positive flow while the pump is in operation.
There are, however, some disadvantages to this plan. The primary disadvantage with this plan is that the cooler fluid is flushed back into the pump. The cooler fluid flows back into the process and, although the flow rates are generally low, the cooled fluid is lost into the process.
Another challenge with a Piping Plan 21 is that it is difficult to achieve a large reduction in temperature. Hot process fluid enters the seal cooler and must be continually cooled. This can result in larger seal coolers, higher cooling water requirements, and an increased tendency for fouling.
Piping Plan 23

Piping Plan 23 takes a different approach to cooling. This plan recirculates process fluid from the seal chamber through a seal cooler and back into the seal chamber. In this plan, the seal cooler only extracts heat from the fluid in the seal chamber which significantly lowers the impact on the thermal losses in the pump.
Due to its efficiency, a Piping Plan 23 can result in a smaller seal cooler, lower cooling water requirements, and lower operating temperatures. It is much easier to maintain low seal chamber temperatures with a Piping Plan 23.
One of the disadvantages of a Piping Plan 23 is that the circulation of the fluid through the system is achieved by a pumping device on the mechanical seal itself. These are common features, typically a small notched ring or screw-like grooves, on the outside of the rotating seal components. This system also requires specific locations for the porting on the seal gland, the location of the seal cooler relative to the pump, and the design of the interconnecting piping.
Seal Coolers

Seal coolers are devices which extract heat from fluids in a seal piping plan. While these can be considered heat exchangers, this term is used to identify their specific function, in support of the piping plan. The seal coolers are designed to provide proper cooling for the flow rates typically seen in piping plans; they are commonly designed with very low flow restrictions on the process side to improve seal performance.
Water-cooled

Water-cooled seal coolers are the most commonly used design in most industries. Cooling water is often available in plants and provides a reliable, stable environment in the cooler. This translates to a stable environment for the pump to operate in, and generally improves the pump and seal reliability. The drawback to water-cooled seal coolers is obviously that they require cooling water. Even in plants that have cooling water, there may be a limited capacity to support new equipment.
Air-cooled

Using air as a coolant is basically free and available everywhere. This can be critical for installations in remote locations, such as a tank farm, or remote facilities such as pipeline stations. Another advantage to an air-cooled unit is that it is immune to fouling due to poor water conditions in the cooling water system.
Air-coolers do, however, have some significant limitations in practice. As it is more difficult to dissipate large amounts of heat into the air, larger seal coolers are often required. In addition, air-coolers will be significantly impacted by ambient temperatures, and thus require additional considerations when contemplating locations with large swings in temperatures. 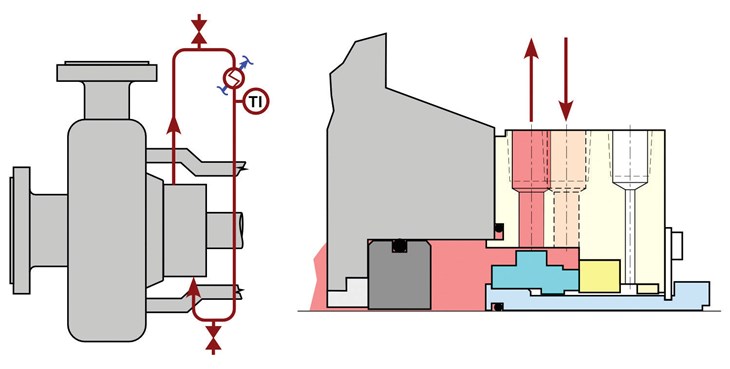 Piping plans with seal coolers have additional requirements in order to effectively create circulation and stable conditions in the system.
Cooler placement

Seal coolers must be mounted be in a location that promotes circulation. In many cases (e.g. Piping Plan 23), this requires that the cooler be placed close to the pump and at an elevation slightly higher the seal (approx. 1.5 to 2 feet or 45 to 60 cm). Placing the cooler close to the pump reduces friction losses in the piping plan which allows for higher flow rates and more consistent temperatures. Putting the cooler slightly higher than the seal creates a thermosyphoning flow which adds to the pumping ring output. In standby conditions, thermosyphoning continues to create a circulation and stabilize temperatures in the seal chamber.
Proper venting

Placing the seal cooler higher than the seal also makes it easier to vent air or vapors out of the piping plan. When a pump is initially flooded with process, it is critical to vent off gases and vapors out of a Piping Plan 23 system to avoid vapor locking the pumping ring. In all piping plans, the piping must be properly sloped to allow for self-venting at start-up, and during operation.
Standby considerations

Standby conditions can be easily overlooked on systems which provide cooling. During standby, there may be very low flow rates (or even no flow) of process fluid through the seal cooler. This can lower the process liquid temperature down to the coolant temperature. This can be the cooling water temperature for water-cooled units or ambient temperatures for air-cooled units.
Conclusions
There are several proven solutions to reducing seal chamber temperatures. These, however, require the application of all the best practices to achieve the most reliable solution for a specific application.
ABOUT THE AUTHOR:

Michael Huebner is a Principal Engineer at Flowserve Corporation in Pasadena, Texas. He has over 30 years of experience in the design, testing and application of mechanical seals both in the USA and Europe. He has authored numerous articles and lectured extensively around the world. He has a BS in Engineering Technology from Texas A&M University.