Once again, the world is in the middle of an energy transition – this time, a shift from fossil fuels to renewable sources of energy. This has implications beyond the technology realm, as moving from high carbon intensity to low carbon intensity brings social, economic, and environmental changes. Countries and markets will not be affected the same way, as there is a myriad of factors that play a role in determining the structure of a given country’s energy mix.

In this article, we are going to review past energy transitions, the characteristics of the current one, and what impacts can be expected for the pump market related to power generation.
By Davi Correia, Senior Mechanical Engineer
What are Energy Transitions? Why do They Happen?
Since its dawn, humanity has been using natural resources for survival and comfort. For a long time, plants and animals were the only ‘fuel’ and the human body the only ‘prime mover;’ “a prime mover is any device which transforms thermal, kinetic, or chemical energy into useful work.”1 One can say that the history of energy transitions is the history of change in fuels and prime movers.
In terms of fuel, individuals moved from biomass – the mass of living biological organisms in a given area or ecosystem at a given time2 – to coal, to oil, to gas. In terms of prime movers, there was a transition from muscle to wind and water (such as windmills, sails, and water wheels), to steam engines and turbines, and then to internal combustion engines and gas turbines.
What was the drive for these earlier shifts? In a nutshell, energy transitions happened in the past when better, more efficient, and convenient technology and fuels became available. Or, if a fuel source became depleted or restricted, as in the case of whale oil for illumination or moving from wood to coal due to diminishing forests.
Now, for the first time in history, the drive for change includes environmental considerations along with technology, cost, and convenience. For many people, the alternative offers lower emissions with convenience, and that is enough to justify the update. 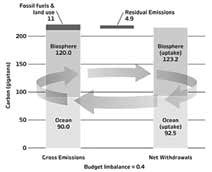 Types of Energy
Smil lists ‘nine major kinds of renewable energies: solar radiation; its six transformations as running water (hydro energy); wind; wind-generated ocean waves; ocean currents; thermal differences between the ocean’s surface and deep waters; photosynthesis (primary production); geothermal energy; and tidal energy. Being renewable does not mean lack of emissions. Burning wood (generated by photosynthesis) is a source of emissions, after all. Also, being a low-emissions source of energy does not mean it is renewable, as in the case of nuclear power stations; they use uranium as fuel, which has limited recoverable resources in the same way as oil.

Why are emissions a problem? Yergin offers a concise explanation. “Using average annual data from the years 2009–2018 (see Figure 1): Some 210 gigatons of carbon were annually, on average, naturally released by such processes as the decay of plants and breathing by people and animals. But 9.5 gigatons came from fossil fuels and 1.5 from land use. This added up to a total of 221 gigatons released. Only 215.7 were captured in the natural annual cycle—that is, absorbed by vegetation and the ocean—leaving a residual 4.9 gigatons in the atmosphere uncaptured (there is also a budget imbalance factor). That uncaptured 4.9 gigatons is only 2.2% of the naturally captured CO2. That may seem a very small amount in any given year. But, over the years, it accumulates and builds up in the band of gases known as earth’s atmosphere. Water vapor is the most prevalent greenhouse gas. Others include nitrous oxide and methane. Some of these gases dissipate after a year or 10 years; others last much longer. Some are more potent than CO2. These greenhouse gases become a shield of sorts, a global ‘greenhouse’ around the planet, retaining more of the sun’s heat, which otherwise would flow back into space. The result is greater warming for the earth—thus known as the ‘greenhouse effect’.”
There is plenty of evidence that the planet is warming and that humans are contributing to it. However, the relationships of cause and effect between this warming and climate are yet not well understood. A recent book, reference #6 for example, argues that many extreme weather events, such as tornados and droughts, have not seen any increase in frequency for the last 100 years, and so are not linked to global warming as many sources often try to report.
Even if the effects of climate change are disputed, some facts still stand. Emissions of hazard pollutants caused – and still cause – health problems in many places, including the United States. It is worth noting that concerns over air pollution can be directly linked to the enactment of many pieces of American legislation – chief among them the Clean Air Act – and the creation of the Environmental Protection Agency (EPA), that is today responsible for setting emission limits and enforcing these limits.
Transformation Hindrances
There are several challenges that hinder the pace of transformation. Two of the most notable are: density and infrastructure.
Renewables have both lower energy density and lower power density. Energy density refers to the quantity of energy contained per unit of mass or volume. The more concentrated the energy is – that is, the denser – the less fuel required for a given application. A direct consequence of this is, for example, is the extreme difficulty in finding an alternative fuel for jet engines in planes; any alternative for aviation kerosene needs higher or similar energy density. Some biofuels have been tested, but concerns over the impact on land requirements and food production are often cited as an impediment to large scale supply.
Another important density measure is power density, which is the rate of flow of energy per unit of land area. It is interesting to note how much land it takes to produce (or consume) a certain amount of energy. Today, a relatively small amount of land is used to produce the majority of the energy the world consumes. Smil calculated that land requirements for fossil fuels extraction, processing, and transportation, along with land for generation and transmission of thermal electricity, take no more than 30,000 km2. This is a land surface area equivalent to Belgium’s. On the other hand, using phytomass (plant biomass) would require ‘12,500,000 km2, roughly an equivalent of the entire territories of the United States and India, an area more than 400 times larger than the spacetaken up by all of modern energy’s infrastructures. 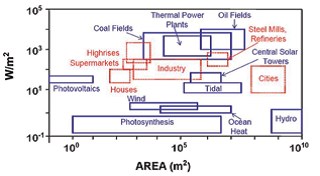 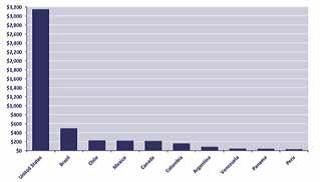 A similar infrastructure needs to be built to renewables, whatever they are. The best sites in terms of incidence and availability for wind and solar, for example, probably will be distant from the end users. High-density cities, for example, will not probably have large areas of available land in their vicinity. In order to connect them, new infrastructure for storage and transmission is needed. In other words, we are talking about a shift in distributing energy from a relatively small number of high power density sites to a world with a great number of energy generating sites, using different, low power densities technologies, each contributing to a small amount of the total energy supply.
What Does this Mean for the Pump Market?
Despite ambitious goals proclaimed by politicians, the world in 2030 (or even 2050) tends to be similar to what we are experiencing now. Lower carbon? For sure, with more efficient prime movers and a larger share of renewable sources. With hope, also some decrease in the per capita use of energy.
Having said that, it is important to look at some forecasts regarding pump expenditure in the power generation industry for the next five years (circumscribed to the Americas). The data reflects pump expenditure associated with nuclear, coal, natural gas, oil, biomass, and concentrated solar power (CSP) power plants. Examples of typical pump applications for such plants are: boiler feed, condensate extraction, cooling-water circulation, ash and limestone slurry handling, and water treatment chemical dosing. 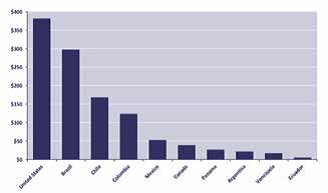 According to market research and consultancy firm Resolute Research, total pump expenditure associated with thermal power plants in the Americas (North and Latin America) is forecast to reach about USD 4.7 billion at the end of 2026. This includes expenditure for new-build plants (‘Original Equipment’) currently under construction and various stages of development as well as expenditure for MRO activities (Maintenance, Repair, Overhaul / “Aftermarket”) at existing plants. Two thirds (66.9%) of this expenditure will be driven by pump requirements in the U.S., followed by Brazil as the second largest market in the region, accounting for about 10.5% of forecast pump sales (see Figure 4).
About three quarters of this expenditure will be spent on pump equipment (MRO) already in service in existing facilities. In the case of the United States, the share of pump expenditure during the forecast period (2022 through 2026) accounted for by existing infrastructure is even higher, about 88%.
For the next five years, about USD 1.1 billion is accounted for by original equipment requirements associated with plants currently under construction or various stages of development. One third (33.4%) of this expenditure will be driven by new plants built in the U.S., followed by new projects in Brazil (26%), Chile (14.7%), and Colombia (10.8%), as we can see in Figure 5. 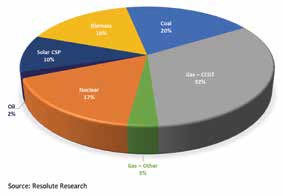 In terms of new pump expenditure (OE) by energy source, nearly one third (32.5%) will be driven by new
Combined Cycle Gas Turbine (CCGT) gas-fired plants, followed by coal-fired, nuclear, and biomass plants (see Figure 6). While the Unites States still accounts for nearly 90% of all existing coal-fired generation capacity in the Americas, this share is set to decrease due to the planned decommissions in the U.S. and new-build plants elsewhere in the Americas. Construction of new coal-fired plants is limited to Latin America, with the bulk of the projects located in Colombia and Brazil.