The Jamaican government is going ahead with plans to introduce liquefied natural gas to the oil-dependent country. Prime Minister Bruce Golding has said that his Cabinet will review a call by the Jamaican contractor general to redo the government’s tender process for the offshore energy project after an assessment of a government contract revealed some irregularities and financial conflicts of interest. But the project, which includes a re-gasification terminal and a natural gas transportation system to feed the electricity grid, is considered too important to scrap. 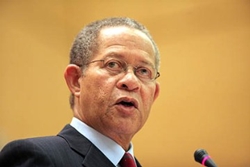