Pump Engineer was lucky enough to speak with Rotating Equipment Engineer, Diego Gomez, about his role within the Debottlenecking Project at the Shell Scotford Refinery, located in Fort Saskatchewan, Alberta, Canada.

Since graduating in 1993, Diego Gomez has accumulated 20 years of professional pump experience. Luckily, after he graduated, he was given an opportunity to work in the oil and gas industry, where he worked on a major project for the biggest refinery in Venezuela, learning from the most senior and experienced engineers. His professional career has taken him all around the globe, including Brazil, Argentina, Chile and Spain, before he eventually settled in Canada in 2007. For the past 4 years he has worked for Shell Canada Project and Technology as a Rotating Equipment Engineer. His current assignment has taken him to support the HCU Debottlenecking Project at the Scotford refinery, which at the moment is Shell’s main downstream project in North America.
The Scotford refinery is one of North America’s most efficient, modern and integrated hydrocarbon processing sites, converting oil sands derived bitumen into finished products. The aim of the Debottlenecking Project is to increase the facility’s capacity by 20%. In order to achieve this, Gomez is assisting in the expansion of several units, which involves the installation of new equipment, such as vessels, compressors, pumps, etc. “I have always been involved with the rotating equipment world since I started working in 1994”, says Gomez. “Right now, I am supporting the execution of the HCU Debottlenecking Project in the Scotford refinery. We are currently in the phase of installation and commissioning of the new equipment. This involves working with the contractors to ensure that procedures are followed and engineering standards are met for the equipment installation process. Some of my responsibilities include monitoring changes and eliminating risks”. Gomez adds that because this specific project is complex and schedule driven, it requires all of his time and concentration. While he previously was able to juggle 5 or 6 small projects at the same time, the Debottlenecking Project is proving more demanding. Gomez further explains that his role is dynamic, which he finds is an enjoyable aspect of the job. Having new and diverse challenges, solving problems and the daily interaction with other groups of professional teams allows Gomez to enhance his personal and professional competences.
A life of pumps
While Gomez explains that he doesn’t approve the final selection of materials for rotating equipment or valves, as those areas of expertise lie with the material and corrosion engineers, he has gathered an extensive knowledge in this area over the past 20 years. He has worked with a variety of pumps, including all kinds of API pumps; from small API pumps, like overhung pumps, up to big multi-stage pumps for different types of services. In Gomez’s opinion, the most difficult pumps to work with have been those handling abrasive fluids at very high temperatures. “There are some demanding materials for the pump itself and also the mechanical seal is one of the major problems in those high temperature applications”. This is often due to the lack of the right flowrate and/or pressure through the seal chamber, as well as having the right combination of materials for the seal faces.
Gomez has a vast knowledge of pumps and pump systems and he has been able to use this expertise to assist other areas of the company, including pump selection and pump maintenance. In the majority of the companies he has worked in, Gomez was considered more of a field engineer and reliability engineer. However, at Shell he has had the opportunity to be involved in a variety of projects, from FEED (Front End Engineering Design) to execution phases. He has had to work alongside different departments, such as the material corrosion specialists, process engineers and instrumentation and control engineers, in order to ensure that the bases of design are accurate and the right equipment is selected for the application (this includes process data, instrumentation, material, etc.). “I have also had to deal with the manufacturer to see what options they have in order to select the most efficient application that meets the project premises”, adds Gomez. 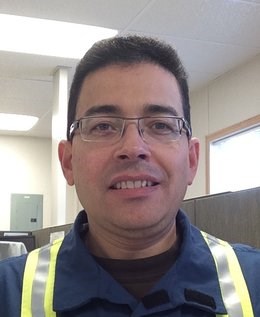