Quenching the world’s thirst for energy while mitigating climate change and air pollution is one of the greatest challenges of the 21st century. Natural gas, particularly in liquefied form, is becoming increasingly utilized as a bridge to a low-carbon economy. To support this trend, additional LNG infrastructure is required, which provides significant opportunities for manufacturers of cryogenic valves.By Matjaž Matošec – Research Manager, Resolute Research

Global reserves of natural gas are abundant, and with significant new shale gas discoveries announced in recent years and more discoveries likely to be made in the future, natural gas provides a reliable source of energy for longer than it may have to be relied upon. Although not carbon-free, combustion of natural gas emits about 30% less CO2 than oil and nearly 50% less than coal, with even greater reductions in nitrogen oxide (NOx) emissions and almost no environmentally-damaging sulfur dioxide (SO2) emissions. An extremely versatile energy source, natural gas powers industrial processes, generates electricity, heats buildings, water and stoves, and – increasingly – is used as a transportation fuel, primarily for trucks and marine vessels.

So why the need to liquefy natural gas? Global gas reserves are distributed unevenly, requiring vast networks of transmission and distribution pipelines to deliver processed gas to end-user markets. Many countries are either lacking the necessary pipeline infrastructure to export/import gas by land or are reaching the limits of their existing pipeline capacity, which provides enormous opportunities for valves sales in its own right as new pipeline infrastructure is being built. Other countries, including some of the largest producers and consumers of natural gas, are either too distant from sources of gas supply/demand to transport it by land or are island nations (e.g., Australia, Japan, Indonesia). The conversion of natural gas to LNG reduces its volume by about 600 times. This makes gas transport by sea commercially viable, thereby overcoming distance and geographic obstacles and in turn boosting the global gas trade as well as providing supply security and flexibility for specific markets.

There are essentially four steps in the utilization of natural gas in the form of LNG: liquefaction occurring in the region of gas abundance, transportation of LNG by ocean-going carriers to regions of gas scarcity, regasification of LNG at the port of delivery, and distribution of gas to the market for electric power plants, industrial processes, and residential, commercial or industrial use for heating. Each of these steps requires immense amounts of infrastructure and flow control equipment, which provides significant opportunities for manufacturers of high-performance cryogenic valves. Additionally, the use of LNG as a transportation fuel, which does not involve regasification, presents further opportunities for cryogenic valves for use in bunkering and fueling stations, which are beyond the scope of this article.

Major equipment associated with liquefaction plants, LNG transport, and regasification plants includes compressors, expanders, heat exchangers, pumps, LNG tankers, LNG storage tanks, and pipelines, along with many other types of equipment. Each of these equipment groups requires valves for isolation, control, or protection of the equipment. 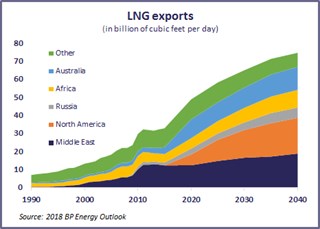 The performance requirements for valves handling LNG are among the most demanding in any industry, especially with regard to low-temperature performance at temperatures around -162°C (-260°F), bubble-tight seat sealing and stringent fugitive emissions performance. Conformity with many national and international industry standards is a requirement, with too many to individually list in this article. While the complete discussion of cold-service industry standards is too expansive to be fully developed here, it is instructive to at least list some of the major standards. They include BS 6364, MSS SP-134 and ISO 28921-1, as related to cold-service performance. Other standards include ASME B31.3, ANSI 1316.34, and API 600, 602, 603, 608 and 609, depending on the type of valve in consideration.

Although a number of body metallurgies are available for cryogenic service, 316 stainless steel is widely used because of its overall performance. Special seat and seal materials and construction features are required to accommodate the differential thermal expansion of valve parts, which complicates the requirement for bubble-tight sealing. Extended bonnet designs for shaft seals are required to ensure tight stem seals against fugitive emissions. The most common end connections include flanged, butt weld, and socket weld to provide the highest integrity against leakage.

Although there are no hard and fast rules regarding the application of specific valve types, ball valves are commonly used in the smaller sizes generally up to 8 inches, with triple-offset butterfly valves used for larger sizes up to 24 inches due to smaller footprint and lighter weight. Gate valves are often used for even larger sizes. However, each valve type can be found in nearly any size category depending on the preference of the customer and the specific circumstances surrounding the application.

The global LNG demand grew by 29 million metric tons in 2017, rising to 293 million tons, according to the 2018 Shell LNG Outlook. This increase exceeded expectations and is largely attributable to additional supply from Australia and the United States on the one hand, and a soar in demand from China on the other hand. The rise in LNG production was both due to higher utilization rates of existing infrastructure as well to additions to liquefaction capacity in Australia, the U.S., Russia and Malaysia. The year 2017 also marked two important milestones for the marine sector: the LNG-carrier fleet hit the 500 mark, while the in-service and on-order fleet of LNG-powered seagoing ships (excl. LNG carriers) reached the 200 mark. 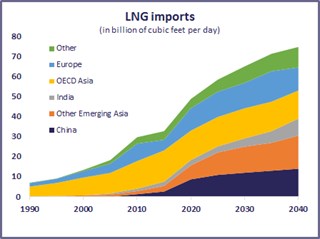 In 2017, China surpassed South Korea as the world’s second largest importer of LNG after Japan, with the country’s LNG imports reaching 38.3 million tons, up 43% from 2016. This growth is driven by several factors, including increased demand for energy across all major sectors (industrial, power generation, residential and commercial), China’s ambitious program to shift from coal to gas and the government’s commitment to tackle climate change and air pollution. As a developing country with high GDP growth, rapid industrialization and urbanization, and increasing prosperity, China exemplifies major drivers for future LNG demand and reveals the full potential and benefits of LNG. Both Chinese domestic LNG production and LNG imports are expected to continue experiencing tremendous growth, including new infrastructure build-out.

Although its first LNG export was completed only in 2016, the United States is becoming a major LNG player and is on track to have capacity to become the world’s second largest exporter of LNG by the end of 2022, just behind Australia and ahead of Qatar, according to the International Energy Agency (IEA). The U.S. boom in shale gas production is boosting domestic natural gas processing capacity as well as the construction of LNG export terminals. As a direct consequence of these developments, the U.S. has become a net exporter of natural gas in 2017, which is a major step towards achieving national energy independence.

Canada ranks among the world’s largest producers of natural gas, with marketable resources of natural gas estimated to be capable of sustaining current production levels for up to 300 years. The country’s exports of surplus natural gas have traditionally been destined to the neighboring U.S., but this market is rapidly shrinking due to the increased U.S. gas self-sufficiency. For Canada to fully tap into its natural resources, the build-up of LNG export terminals is of the essence. The country still awaits a final investment decision (FID) for its first, long-planned and repeatedly delayed LNG Canada export project on the Canadian Pacific coast, highlighting the immense capital investment costs and risks associated with LNG infrastructure.

In its latest Energy Outlook, BP predicts that LNG supplies will more than double by 2040, with around 40% of that expansion occurring over the next five years. While the materialization of this scenario depends on multiple factors, including the stringency of future carbon emission targets, the LNG market is poised for continued growth. By extension, bright future is ahead for the LNG valve market because highly engineered valves for cryogenic service are an ongoing requirement not only for new installations, but also for repair and replacement of the substantial infrastructure already in service. 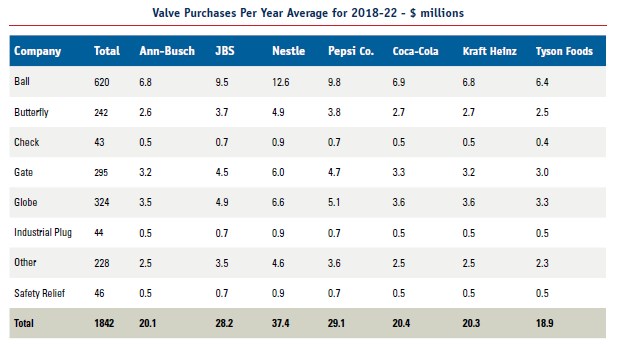