Since the introduction of the U.S. Clean Air Act in 1963, the U.S. Environmental Protection Agency (EPA) and individual states have set increasingly stringent consent decrees for fugitive emissions from industrial facilities. Many companies have implemented Leak Detection and Repair (LDAR) programs, and industry groups have focused their efforts on helping member companies decrease valve emissions. Written by Greg Cole of A.W. Chesterton

The Emergence of Test Standards
Many standards organizations have established various test standards to assess the fugitive emissions performance of valve packing and overall valve emissions. This has led to a wide variety of test standards. Organizations such as API, ISO, MESC, ANSI, and TA-LUFT all have established valve and/or packing test standards, with possible variations to those given standards.
Making sense of these standards and the advantages/disadvantages of each has been topic of many presentations, papers, and discussions in the effected industries over the past several years.
American Petroleum Institute (API) Standards
For the petroleum industry in particular, the American Petroleum Institute (API) has developed some of the most commonly used standards.
There are three API valve/packing emissions standards tests, which are prevalent today:
• API 622 Type Testing of Process Valve Packing for Fugitive Emissions
• API 624 Type Testing of Rising Stem Valves Equipped with Graphite Packing for Fugitive Emissions
• API 641 Type Testing of Quarter-turn Valves for Fugitive Emissions
For many API rising stem valve design standards (such as API 600, 602, 603, and 623), API 624 has been or may be written into the standard as a requirement for the valve design. This means the valve will not be considered conformant to the respected standard unless the design has successfully passed the requirements of API 624.
Similar wording in quarter turn stem valve design standards (such as API 608 and 609) is currently being considered in relation to the valve type test API 641. If this comes to pass, any valve which is manufactured and tagged with the API 608 or 609 standards must pass the requirements of API 641. API 608 is currently being reviewed for the 6th edition and the exact wording for the API 641 requirement is a topic of debate.
API 622: Type Testing of Process Valve Packing for Fugitive Emissions
The first standard in a series of nested low emission valve and packing standards is API 622. API 622 is currently in its second edition with the 3rd edition due to be released later this year.
As the title states, this is the type test for the packing set itself. It eliminates the use of a valve and the variables inherent with a given valve; instead using a standardized test fixture. By using a test fixture and a specified set of conditions, various packing sets from many manufacturers can be evaluated under the same circumstances.
Currently, API 622 2nd edition is a performance test which runs a span of 1,510 mechanical cycles (full actuations from open to close) at 600 psig operating pressure over 5 thermal cycles. Leakage measurements of the test gas, methane, are taken periodically throughout the test.
During a thermal cycle, the test fixture will be operating at ambient temperature for 150 cycles. Then the temperature is increased to 500°F and another 150 mechanical cycles will be run. The final 10 cycles are run at ambient temperature.
The test fixture was designed to resemble a 4”300# Gate valve which uses a 1/4”cross section packing sample and a 4” stem stroke (distance traveled from fully open to fully closed).
The specifics of this test fixture are detailed within the test standard so that all tests, independent of location, can be compared. In the current edition, leakage of up to 500 parts per million volume (ppmv) is allowable; along with 1 adjustment of the gland bolts should the packing start to leak during testing.
Many of these details are set to change in the upcoming 3rd edition. While these details may further change prior to release, the 3rd edition will further restrict leakage of the packing set to 100ppmv while eliminating the single allowed gland bolt adjustment. The 3rd edition will also add in the requirement of a 1/8” packing sample test, which has been problematic in valve-type testing. 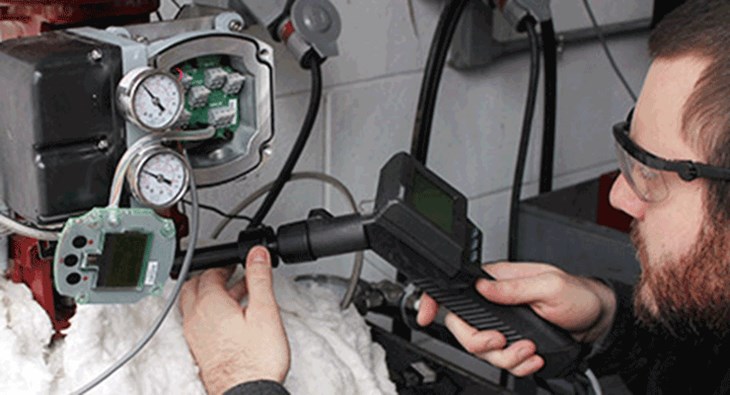 API 624: Type Testing of Rising Stem Valves Equipped with Graphite Packing
As stated in the title, this is the type test of the valve itself, including the packing stem seal. This test standard is intended to test the low emissions capability of a valve over an accelerated life cycle. API 624 is a valve-type test meant to evaluate the performance of the valve itself, not the packing alone.
•The packing used in an API 624 tested valve must have been previously tested to API 622. As a result, all of the variables inherent with a given valve design are being tested in API 624, while the packing has theoretically been proven to be sufficient for use in a Low-E valve.
• The test runs a span of 310 mechanical cycles, at 600 psig operating pressure, over 3 thermal cycles while periodic leakage measurements of the test gas, methane, are taken.
•During thermal cycles, the valve will run at ambient temperature for 50 cycles, the temperature is increased to 500°F and another 50 mechanical cycles will be run. The final 10 cycles are run at ambient temperature.
•The allowable leakage during this test is 100 ppmv at the stem seal, with no allowable stem seal adjustments. If at any point leakage exceeds 100 ppmv, the test is considered a failure.
API 622 vs API 624:
There are many similarities between API 622 and API 624. The major differences in the current versions of API 622 and API 624 are:
•The cycle count

•Use of stem seal adjustments

The differences in the standards can be attributed to the difference in the intent of each standard. API 624 is meant to evaluate the low-e performance of a valve design over a simulated valve life cycle representative of 5 years. API 622 is meant to prove the low-e capability of a packing set alone.

This standard was released in late 2016. As with API 624, API 641 is the type test for quarter turn valve designs, evaluating low emissions performance over an accelerated life cycle. Unlike, API 624
where the valves being testing are very similar in design, API 641 is meant for quarter turn valves which cover many different designs, temperature ratings, and sealing components. This led to a test standard, which is more complicated than the proceeding API 624.
The constants in API 641 are the test fluid, methane, the mechanical cycle count of 610 90° alternating rotations, and a 100 ppmv leakage rate. After these constants, the remaining test parameters of packing material, test temperature, and test pressure are dependent on the valve design and intended use.
For valves tested to API 641, which use a graphite based packing material, the packing must first qualify to API 622. If the packing set is not covered under the scope of API 622, the packing set does not need to be previously tested to API 622. This allows for the use of other packing materials such as PTFE.
Due to the low temperature capabilities of some valve components, API 641 was written so the test temperature can vary depending on the valve design and rated temperature capabilities.
There are 2 groups of valve temperature ratings detailed in API 641. Valves rated above 500°F (250°C) are tested to a different set of parameters than valves rated below 500°F (260°C). Depending on the pressure rating of the valve at the given test pressure, the valve would be tested at a maximum pressure of 600 psig. As you can see, this starts to become complicated and the test parameters are dependent on the valves rated pressure and temperature capabilities.

Constantly Evolving Standards
Valve and packing testing doesn’t stop here. There are many other organizations which have test procedures which cover many different valves and have similar intents. Familiarizing yourself with the nuances of these test standards can be critical in being able to decipher the results of a given test or the requests from customers or end users.
About the Author
Greg Cole is Mechanical Packing Design Engineer for A.W. Chesterton Company. He holds a BS in Mechanical Engineering from the University of New Hampshire. He started his career as a test lab technician before moving on to a Mechanical Packing Applications Engineer then to his current role.