The Oil & Gas industry is well known for operating in harsh environmental conditions. The engineering needed to withstand these natural forces must be structurally sound, or the risk of health and safety-related incidents can increase. Products and systems in the oil and gas industry must also be durable, long-lasting, and rigorously tested.

Regular maintenance is not always possible in remote locations where the industry operates. Having the ability to accurately design and test components such as pumps or even large-scale structures like oil rigs is an essential part of the design process.

The ability to simulate a variety of situations that a pump or large structure could be exposed to, allows for designers and operators to preemptively prepare for otherwise potentially unforeseen complications. For example, consider an offshore oil rig exposed to high and unpredictable winds and structural forces regularly (Figure 1). When designing the rig and selecting suitable sites for its operation, assessing the rig’s climate-induced influences is essential for quantifying the risk, mitigation measures, and design changes that must be met in order for successful and safe operation. Figure 1 shows the results of a wind analysis on the rig. The study illustrates the wind velocities and forces on the structure, as well as the floor level wind speeds that workers would be subjected to. This type of digital wind tunnel analysis can be critical for industries that operate in harsh conditions and are becoming more available to engineers through the cloud. 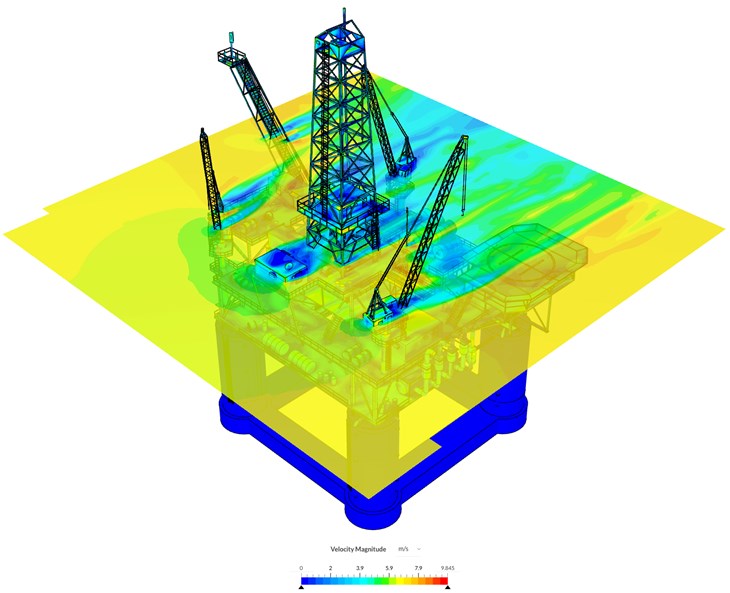 Computational fluid dynamics (CFD) is a type of engineering simulation concerning fluids’ behavior and properties (liquids and gases). In CFD, a digital representation of a physical object is created using a 3D CAD model. This model is then ‘simulated’ in the desired environmental conditions by applying the properties and behaviors of fluids, materials, and the environment.
The primary heat transfer mechanisms of conduction, convection, and radiation are modeled along with the fundamental fluid properties such as viscosity, density, and turbulence. In essence, a digital twin of an object is created, such as a pump, and mathematically simulates its real-world performance based on a set of realistic assumptions. By varying the 3D model parameters, such as pump size and shape, it is possible to simulate a pump’s performance in multiple configurations and environmental conditions. The testing can be done for multiple pump design candidates, such as different rotor sizes for a given volute, or different rotor design. An engineer will perform a simulation of a given pump design for the entire range of allowed flow rates in order to assess the performance (head) and calculate the reaction forces and moments acting on the rotor (impeller), to then choose/size the motor and the shaft bearings.
This is especially important when designing a pump for harsh conditions that do not lend themselves to being easily tested. A digital twin model can also significantly reduce physical prototyping costs as the design feedback and hence, iteration, is coming straight from the virtual prototype being simulated. 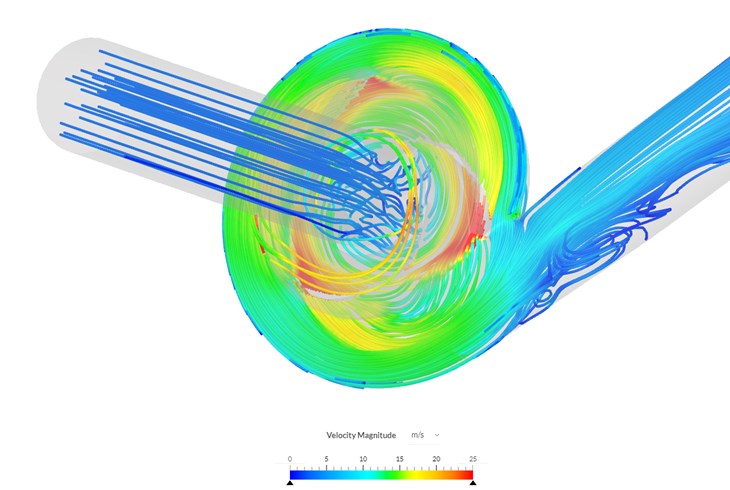 The Benefit of Simulation in the Cloud

CFD in the cloud gives engineers the ability to access simulation from anywhere, through their preferred web browser. The application is hosted and run entirely on the cloud, making it accessible and secure, eliminating the need for in-house storage solutions. One of the powerful features of simulating in the cloud is the scalable and on-demand computing power, without the need for expensive and local hardware. This means an engineer designing a pump can set up and run dozens of simulations simultaneously for each design variation, and also for different operating points and working conditions for the same pump design. A pump might have half a dozen parameters in its design that can potentially be varied to arrive at an optimal configuration. For example, pump features that can be optimized include the shape, number, and size of the pump blades, the radius of the pump itself, the inlet and outlets of the casing, and the impeller’s rotational speed (RPM). Environmental variables that need testing will include the temperature, viscosity, and density of the fluid, e.g., types of crude oil, the ambient temperature, and structural and loading forces on the pump assembly. For each of these parameters, a range of input values should be simulated to gain an accurate understanding of the performance limits of a particular pump design. This testing level can only be achieved through CFD analyses with significant cloud computing resources to drive it. 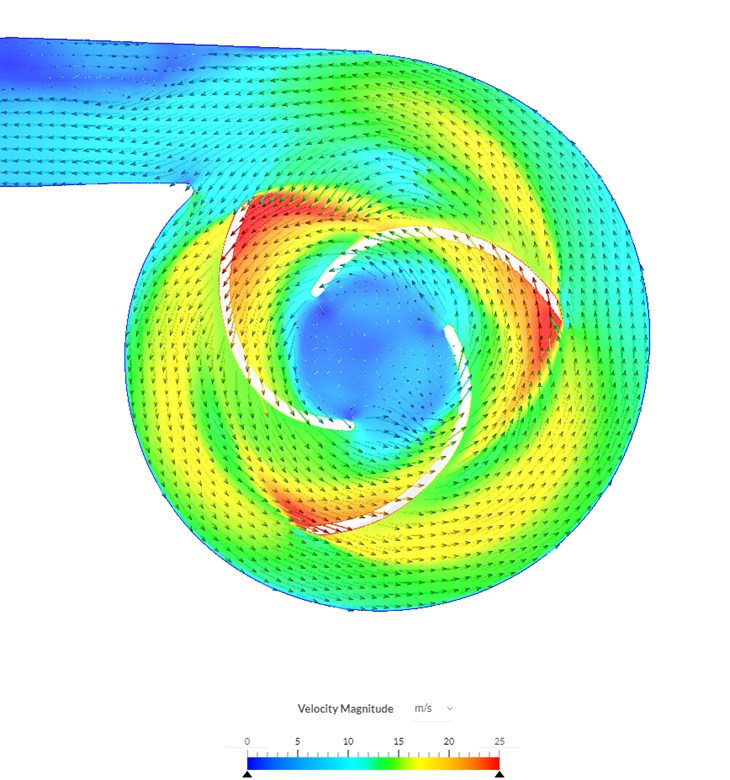 Pumps in the Oil & Gas Sector

A centrifugal pump, commonly used in the oil and gas industry to pump crude oil, is simulated in CFD (Figure 2). In this simulation, crude oil with an API of 30° is used. The API is the American Institute of Petroleum’s gravity metric for describing the density of oil relative to water. An API bigger than 10 means the oil will float in water. Lighter crude oils (higher API values) are generally considered more valuable as they produce more lightweight finished products in the refinery process.
In this study, the pump is pushing a fixed flow rate of 3 m3 of crude oil with a density of 865 kg/m3 (actual density varies with temperature). The analysis is run at 10°C increments starting at 50°C and ending at 10°C. With each decreasing temperature step, the viscosity and density of the crude oil will rise. An engineer can use CFD to evaluate the impact of density and viscosity on pump efficiency and power requirements, especially useful for off-shore applications where the average line temperature of an oil pipeline, for example, varies seasonally. The torque calculated on the pump blades is an output of the CFD simulation and is used to calculate power. As the density of oil being pumped increases at lower temperatures, this will place an additional power load on the pump, requiring more energy to pump the same volume of oil, eventually placing more wear and tear on the pump components. If we use the run at 50°C as the baseline for comparison, the pump power required to maintain the same flow rate increases by up to 6% when the oil temperature decreases to 10°C, as it becomes thicker (Figure 4). With increasing temperature, the viscosity of the oil decreases (high Reynolds number flow and therefore a lower friction factor to overcome). The pump is run at 200 RPM, and the flow velocities can be seen in Figure 3. 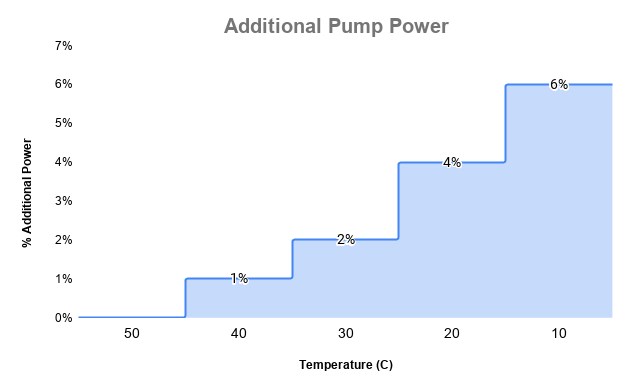 Computer simulation of components and systems is especially useful for evaluating design performance and, gives the ability to virtually analyze a wide set of operating conditions and environments. CFD on the cloud has lowered the cost and resources needed to access high fidelity engineering simulation.
About the Author

Naghman is a simulation expert working at SimScale. He has a Ph.D. in simulation and modeling from the University of Nottingham and a Master’s Degree from Imperial College London, UK.